Suriname (the Republic of Suriname) is bordered by French Guiana (east), Guyana (west) and Brazil (south) with the Atlantic on its north coast. The country's name was changed from Surinam in 1978.

The Arawaks arrived in the Guianas before 3000 BC, followed by Caribs and inland tribes. Columbus sighted the region in 1498 and by the 17th century Suriname was part of a group of Dutch plantation colonies. Disputes between the Dutch and English led, in 1667, to a settlement in which the Dutch kept Suriname in return for New Amsterdam (now New York).

Plantations relied on African slaves with slaves who escaped interbreeding with inland tribes to form the Maroons who were eventually given trade rights. Slavery was abolished in 1863, slowly replaced by contract labourers from the Far East, especially from India and China.

During World War 2 the USA protected the bauxite mines and after the war, in 1954, Suriname became a country of the Kingdom of the Netherlands until, in 1975, independence was granted. A large part of the population then emigrated and the economy was left with a corrupt political system dependent on Dutch aid.

A series of military coups and counter-coups began in the 1980s and the political situation remains fluid. The economy is dominated by bauxite and agriculture.

Suriname is underlain by the Guiana Shield; a Precambrian block that forms the major part of the northern highlands and coast. Most of the offshore is a continuation of this block, known as the Demerara Rise. There is  limited sedimentary cover onshore with sediments only thickening offshore

Onshore the country can be divided into two main geographic regions. The northern, lowland coastal area is where most of the population lives. The southern tropical rainforest and savanna is sparsely populated but covers about 80% of the land.

Heavy oil has been produced since 1983 from the Tamaredjo field, in an onshore part of the Guyana basin. Other small fields in the neighbourhood have allowed the country to expand output but a peak has now probably been reached.

The country produces no offshore oil with drilling offshore on the Rise failing to find hydrocarbons. A deep water well, Zaedyus-1, was drilled in 2011 in French Guiana and discovered a significant oil column in two turbidite fans. It was a pivotal well, thought to have unlocked a new productive area along the northeast coast of South America, with fields analogous to those in West Africa.

However, subsequent drilling in Surinam has not met with success and the whole area remains high risk with a shortage of sufficiently large trapping possibilities. Offshore thus has no commercial oil or gas resources and Globalshift does not forecast any production, at least in the short and medium term.

Suriname produces and uses no gas.The southernmost borders of the country remain disputed but the maritime boundary with Guyana was arbitrated by the UN Convention on the Law of the Sea in 2007 allowing drilling to proceed. 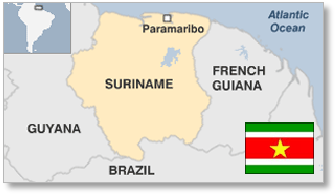 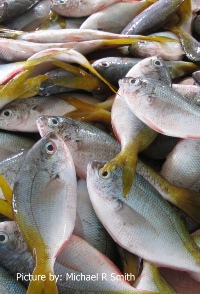 Catch of the day

Suriname is a representative democratic republic.

The President, elected for a 5-year term by the National Assembly, is head of state. The president appoints a 16-member cabinet.

The legislative branch consists of a 51-member unicameral National (People’s) Assembly elected for a 5-year term.

The Ministry of Natural Resources sets policy for the exploitation of oil and gas resources in the country.

It was founded in 1980 and is involved in exploration, production, refining, marketing and transportation of oil products, whilst monitoring the operations of foreign oil and gas companies in Suriname.