China (the People's Republic of China or PRC) is the world’s most populous and second largest country. It borders 14 countries and has a coastline running along several seas of the Pacific Ocean margin.

China has been populated for over 100,000 years and is one of the world’s oldest civilisations. According to Chinese tradition, the first dynasty was the Xia, which emerged in 2100 BC. The Qin Dynasty ruled the first unified state from 221 BC and up to 1911 its political system was based on hereditary monarchies.

The Qin was followed by another 8 dynasties during which the Chinese Empire reformed its borders many times. It ceded Hong Kong to the UK in 1842, and the Korean peninsula and Taiwan to Japan in 1895.

The last dynasty was the Qing which ruled from 1644 until it was overthrown in 1911 after which the country was mostly ruled by nationalists of the Kuomintang Party or Japan.

After World War 2, the Communists defeated the nationalists (who fled to Taiwan) and the PRC was established in 1949. China was a closed state until market-based reforms began in 1978 since when economic growth has been spectacular.

China recovered Macau and Hong Kong in 1997 and 1999 respectively and is now the world’s second largest economy and the largest exporter, but is still tightly controlled by the Communist Party.

China has a landscape ranging from forest steppes and deserts in the north to subtropical forests in the south beneath which at least 10 significant oil and gas bearing basins lie, in addition to several more offshore in the Bohai Gulf, East China Sea and South China Sea.

The earliest reports of oil and gas originate during the Han Dynasty (to 220 AD). For many centuries, gas was used to evaporate brine and also for rudimentary lighting and heating.

Significant oil production did not begin until 1939 from Yumen in central China and later in the 1950s from Karamay (the Junggar Basin) in the far northwest near the border with Kazakhstan.

Output only began to grow substantially after 1960 when the giant Daqing field came onstream in the Songliao Basin in the northeast followed by the heavier oil Shengli, Dagang and Liaohe fields in onshore parts of the Bohai Bay Basin east of Beijing.

Output from these and other fields is now maintained through extensive drilling and enhanced recovery techniques but Globalshift expects fields to generally continue to decline. A number of other basins also produce lesser volumes; especially the Ordos Basin west of Beijing and offshore in the Bohai Gulf and further south along the shelf margin.

Gas production is expanding, especially from inland basins. China is looking to gas, including shale gas, to reduce coal use. It has built a lengthy pipeline infrastructure and imports from Russia, Central Asia and Myanmar (as well as importing LNG). Economic growth has led to a rapid increase in oil and gas consumption. 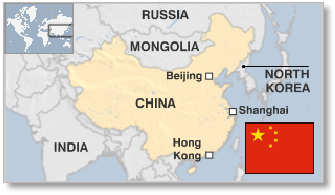 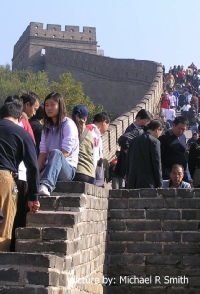 Crowds on the Great Wall

The President is the ceremonial head of state under the National People's Congress. The Premier is head of government, presiding over the State Council.

Overseen by the Ministry of Land and Resources, oil and gas are controlled by 3 mostly state-owned companies; the Chinese National Petroleum Corp (CNPC) and its subsidiary PetroChina; the China Petroleum and Chemical Corp (Sinopec); and the China National Offshore Oil Corp (CNOOC).

Smaller Chinese-owned companies operate in some onshore areas whilst international companies have engaged in joint ventures where specialised technologies are sought. Since the 1990s they have been granted offshore PSAs, partnered by CNOOC.