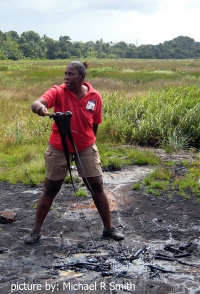 LA BREA IN THE SOUTH

Trinidad was settled at least 7,000 years ago and was occupied by Arawaks and Caribs when Columbus arrived in 1498. It became part of New Spain after the 1530s but settlers fought a persistent war with the local tribes. In 1770 it began to be populated by French settlers, with their slaves, who migrated from nearby islands to establish plantations.

In 1797 it became a British Crown Colony in a peaceful takeover and, when slavery was abolished in 1833, a new wave of labourers arrived from India and China. Tobago, which had been ruled by several European nations, was combined with Trinidad in 1889.

Agricultural exports were replaced by oil as the main source of foreign exchange in the 1930s and US military bases were set up during World War 2. The West Indies Federation was formed in 1958, but was dissolved after the withdrawal of Jamaica, and the country gained independence from the UK in 1962, becoming a republic in 1976.

Oil wealth ensured relative political stability and the country has increased its living standards greatly. The economy is primarily industrial, especially oil, gas and petrochemicals, but it wishes to re-develop its agriculture. Tourism into Tobago is also important.

Trinidad and Tobago lies on the continental shelf of South America and is geologically within South America rather than the Caribbean. It consists of 2 main islands plus a number of islets.

The terrain is a mixture of mountains and plains with the highest point at 940m in the north, an east-west trending range of mountains of Upper Jurassic and Cretaceous metamorphic rocks.

The Northern Lowlands consist of younger shallow marine clastics. South of this, the Central Range fold and thrust belt comprises Cretaceous and Eocene sedimentary rocks. The Southern Lowlands are underlain by Miocene and Pliocene sands and clays where most of the oil fields are located. Finally the Southern Range is a chain of recently uplifted hills in which oil sands and mud volcanoes can be seen at the surface.

Oil production began in 1908 from basins in the south of the island. Output peaked in 1977. Onshore light and heavy oils are still in decline but offshore output has increased as fields off the east coast replaced those in the Gulf of Paria in the west, and as condensates and NGLs are produced with gas.

Gas production was increasing with fields offshore the southeast (including fields shared with Venezuela) and off the north coast feeding the country’s large LNG plant at Point Fortin. Globalshift believes deep water oil and gas production may be achievable in the longer term but the country is now struggling to maintain oil output and meet gas demand into the Atlantic LNG plant.

Trinidad consumes and exports large volumes of gas relative to oil in its mature economy. Gasoline is heavily subsidised. Tobago has no oil or gas. 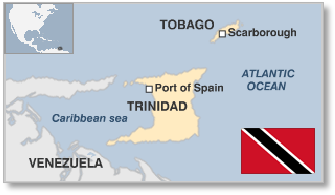 The country is a republic with a bicameral parliament based on the UK system. The head of state is the President elected by an electoral college.

Parliament, led by a Prime Minister, comprises a 31-member appointed Senate and a 41-member elected House of Representatives.

Tobago has its own elections, separate from the general elections.

The Ministry of Energy and Energy Affairs oversees the industry.

Petrotrin is the oil NOC incorporated in 1993 in a merger of Trintoc and Trintopec and, in 2000, Trinmar. It is now an oil and gas company engaged in a full range of operations.

The National Gas Company (NGC) is the gas NOC established in 1975.

Atlantic LNG is a private company located in Point Fortin formed in 1995. It is a joint venture between 4 energy majors and the government.