Vietnam (the Socialist Republic of Vietnam) on the Indochina Peninsula borders China (north), Laos (northwest), and Cambodia (southwest). It has a long coastline abutting the South China Sea.

Kingdoms in north Vietnam unified into Nanyue in 207 BC. In 111 BC Nanyue was incorporated into the Chinese Han Empire. In 939 AD local dynasties took control, repelling Mongol invasions and conquering the central Vietnamese kingdom of Champa in 1475.

In the 1630s civil war broke out between the northern Tranh and southern Nguyen lords of the Le dynasty. The latter annexed the Mekong area from the Khmers and unified Vietnam with French support. But France went on to subdue the new leaders to create French Indochina in 1887, imposing French culture. A resistance movement emerged but was repeatedly suppressed.

At the end of occupation by Japan in 1945 Ho Chi Minh led the fight against French rule, expelling them from the north in 1954. Vietnam was divided into the North, supported by China and the USSR, and the South, supported by the West, marking the beginning the Vietnam War.

The war ended with victory by the North in 1975. The country was then unified under a communist government, at first subject to sanctions by western powers. Vietnam began reforming its economy in 1986 and by 2000 its economic growth was amongst the highest in the world. It is now a thriving developing economy relying on manufacturing and tourism.

Vietnam lies on the eastern Indochina Peninsula. It has a coastline 3,444 kms long whilst at its narrowest point it is only 50 kms wide. This increases to 600 kms in the north. Its terrain is mostly hilly and densely forested with mountains covering around 40% of the territory.

The north consists mostly of highlands surrounding the Red River Delta. Phan Xi Pang is the highest mountain in Vietnam at 3,143m. The south comprises coastal lowlands, mountains of the Annamite Range, and extensive forests over the flat basaltic plateaux. The Mekong River Delta covers a low-level plain crossed by numerous rivers and canals.

Although small volumes of gas have been produced onshore in the north since 1975, the bulk of Vietnam’s production comes from offshore in basins along the southern coastline underlying the South China Sea.

First oil was produced in 1986 from the Bach Ho field. After 1986 output rose rapidly, especially from the central Cuu Long basin. However, Globalshift forecasts that decline of Bach Ho and other early fields will now only just be offset by new developments, including, in the longer term, from deep waters.

Gas production began in 1995 rising in the 2000s when fields in the southern Nam Con Son basin were developed.

Continued growth is forecast by Globalshift to satisfy an expanding market. 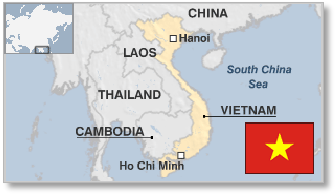 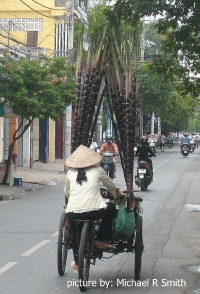 Vietnam is one of the world's 4 remaining one-party socialist states officially espousing communism (along with China, Cuba and Laos). The Communist Party has a central role with the General Secretary performing key administrative and executive functions and setting policy. However its economic policies have grown increasingly capitalist. The President is the titular head of state and military.

The Industry and Trade Ministry oversees the oil and gas sector whilst Vietnam Oil and Gas Group (PetroVietnam, PVN) is the NOC, established in 1977. It makes most licensing decisions and engages in all oil and gas operations, responsible for oil and gas resources in the country.

Vietnam is a member of the Association of Southeast Asian Nations (ASEAN) which it joined in 1995.