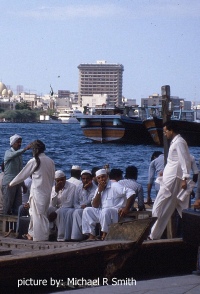 Taxi on the Creek

The UAE has been occupied by nomadic tribes for thousands of years. From 700 BC, as part of greater Oman, it lay within the Persian Achaemenid, Parthian and Sassanian empires. In 637 AD nomadic Arab tribes took control with the most powerful eventually evolving into the 7 Emirates, especially the Bani Yas of Abu Dhabi.

In the 16th century the region came under the influence of the Ottomans with Persia and Western Europe also competing for territory. Now known as the Pirate Coast, in 1820 the emirs signed a protection treaty with the UK giving rise to the name, Trucial States. The treaty was strengthened in 1892.

The Gulf had become a centre for the pearl industry but its decline after World War 1 caused economic depression until oil was discovered off Abu Dhabi in 1958.

In 1971 the UK decided it was unable to continue to provide protection and Abu Dhabi and Dubai led the formation of the United Arab Emirates. Since then oil revenues have been used to develop healthcare, education and infrastructure. The economy is relatively diversified but is generally still reliant on oil and gas exports.

The largest of the 7 emirates is Abu Dhabi, accounting for 87% of the area. The smallest, Ajman, covers only 0.3%. Prior to withdrawing in 1971, Britain delineated borders although some conflicting claims were only resolved after the UAE became independent, especially in the Al-Hajar al-Gharbi Mountains in the northeast.

Most of the coast consists of salt pans. South and west of Abu Dhabi rolling sand dunes merge into the Rub al-Khali (Empty Quarter) of Saudi Arabia. The largest natural harbor is at Dubai although other ports have been dredged.

Numerous islands lie in the Persian Gulf comprising coral reefs and shifting sandbars a number of which are disputed with Iran or Qatar. The UAE also has a stretch of the coast of the Gulf of Oman, although the Musandam Peninsula, forming the tip of Arabia by the Strait of Hormuz is an exclave of Oman.

The country includes 4 states that have produced oil or gas but only Abu Dhabi and Dubai are significant. The bulk of onshore oil has been produced in Abu Dhabi, from 1963. Offshore production began in Abu Dhabi in 1962 and Dubai in 1969. The UAE, as a member of OPEC, has restricted oil output at times whilst trying to create new capacity.

Production is declining in Dubai after it peaked in 1991 but Abu Dhabi has a number of on and offshore re-development and expansion projects in progress in the Persian Gulf, primarily involving gas injection and Globalshift expects growth from these.

Gas production is also increasing in Abu Dhabi both for re-injection into oil fields and for export as LNG or to Dubai. Demand for gas has grown very fast for electricity generation, desalination and new industries. 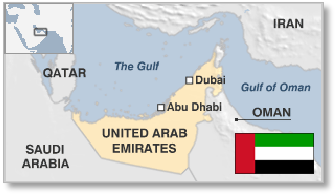 The United Arab Emirates is an autocratic federation of hereditary absolute monarchies governed by a Federal Supreme Council made up of the 7 emirs. A percentage of revenues from each emirate is allocated to the UAE's central budget.

Although elected by the Supreme Council, the presidency and prime ministership are held by the emir of Abu Dhabi and Dubai respectively. The UAE convened a half-elected 4-member Federal National Council in 2006 restricted to a largely consultative role.

The United Arab Emirates became a member of OPEC in 1967.