Barbados is an island of the Lesser Antilles in the western North Atlantic Ocean (although considered a Caribbean island). It lies 100 kms due east of the Windward Islands (St Vincent and the Grenadines).

Amerindians settled in the 4th century, replaced in the 13th century by Kalinago Caribs from South America. The island was visited by Spanish in the late 15th century and was claimed for Spain which raided it for slaves and left it uninhabited.

In 1625 an English ship arrived, followed in 1627 by permanent settlers. By 1639 a major colony had been established with indentured labourers working tobacco and cotton fields. The sugar cane industry began in the 1640s leading to a reliance on African slaves delivered by Dutch traders. The UK abolished the slave trade in 1807 but Barbados continued to use them until 1834.

In the 1930s slave descendants began to fight for political rights and in 1942 the poor people and the women won the vote. In 1958 Barbados became one of the 10 members of the West Indies Federation. This was dissolved in 1962 and it reverted back to a self-governing colony, finally negotiating independence from the UK in 1966.

The economy relied on sugarcane but since the 1980s the island has diversified into light manufacturing and tourism whilst finance and information services are also important.

Barbados comprises a series of terraces of coral with fringing reefs and eroded caves and gullies. It is flat compared to the Windward Islands in the west, rising gently to a central highland region. The highest point is Mount Hillaby at 340m.

Although the geology is not very favourable for commercial oil and gas fields, minor amounts of oil have been produced from the Woodbourne area since 1966 with a little oil also produced previous to this between 1920 and 1940. Small amounts of gas are produced and consumed locally in the same area.

The limited size of this productive area leads Globalshift to believe that there is little chance for significant oil production increases in the future although some gas potential remains if a market could be established. There is no offshore production in the country and only one deep water exploration well has been drilled which failed to find hydrocarbons. Although companies continue to license offshore blocks, no commercial offshore discoveries are forecast in the country in the long term. 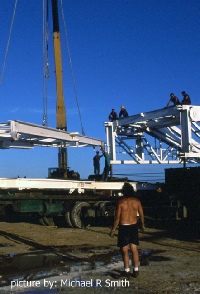 Barbados became a republic in Nov 2021 after being a British constitutional monarchy since independence in 1966. An elected president (the former governor general) is interim head of state advised by the Prime Minister of Barbados, who is head of government and the 30-member House of Assembly.

The Energy Division, established in 1978 in the Ministry of Trade, is responsible for oil and gas, alternative energy and conservation. It provides geology services to other Government departments and the private sector.