There are 5 main offshore sedimentary basins in Ireland. They are the Celtic Sea Graben, the Central Irish Sea, the Rockall Trough, the Porcupine Basin, and the Northwest Offshore Basin.

The basins are sub-divided into smaller rifts including the Slyne and Erris Troughs in the Northwest, Kish Bank in the Irish Sea on the east, and the North and South Celtic Sea Basins south of the country.

The Celtic Sea and the Northwest Offshore Basins have producing fields and the Porcupine Basin has significant discoveries.

All the basins are Mesozoic in age, evolving in response to 3 phases of development relating to the opening of the North Atlantic during the Permo-Triassic, the Mid to Late Jurassic, and onwards from the Cretaceous.

The Kinsale Head gas field was discovered in 1971 by Marathon. It is a shallow, Lower Cretaceous anticline with oil and gas within Greensand and Wealden reservoirs. The field came onstream in 1978 providing gas into the domestic market. It is estimated to have had reserves of up to 60 bcm and is the largest Cretaceous gas discovery in Ireland. It was abandoned in 2020.

The Seven Heads gas field was discovered in 1974 also by Marathon. Gas is present within Lower Cretaceous and Wealden reservoirs. It eventually came onstream in 2003 as a tieback to Kinsale Head.

Ballycotton was discovered in 1989 with gas in a Lower Cretaceous reservoir trapped in a shallow anticline similar to Kinsale Head. It came onstream in 1991. Both Seven Heads and Ballycotton will be abandoned along with Kinsale Head.

Finally Kinsale Head Southwest was drilled in 1995 and tied into the existing facilities in 1999. However, it was converted to gas storage in 2001 and began receiving gas from the Irish onshore network in 2006.

Beneath Kinsale Head Southwest are stacked Lower Wealden and Purbeckian sandstones. These were found to contain oil and gas in a well drilled in 1973. The operator, Providence, has been attempting to develop the discovery, known as the Barryroe oil field. It farmed-out to the Chinese company APEC Energy in 2018 but had failed to receive any funds by the end of 2019.

The Ram Head field was discovered in 1984 by Marathon. Operated by Predator in 2019, appraisal drilling and re-entry is planned to fully test the field. It may have reserves of 28 bcm that could be produced with 10 development wells.

The NW Offshore Basin - is subdivided into the Slyne and Erris Troughs.

The producing Corrib gas field is an anticline in the Slyne trough. It was discovered by Enterprise Oil in 1996 and was the second largest discovery in Ireland. It holds gas within sandstones of the Triassic Sherwood Formation. The source rock is Carboniferous coals and the cap rock is the halite-rich Mercia Mudstone.

Shell acquired Enterprise in 2001 and finally brought the Corrib field onstream late in 2015. Vermillion took over operatorship in 2016 and by 2019 the field was supplying most of Ireland’s gas.

Other prospects have been identified in the Slyne Trough including Corrib South, with a potential Sherwood reservoir. This is planned for testing in 2020 and if successful would be tied into the Corrib Field. A similar prospect in FEL 4/19, 11kms northwest of Corrib, is known as Inishkea.

Both have risks in the effectiveness of their cap rocks to seal gas accumulations after the Mid-Cretaceous inversion event. Furthermore, Inishkea has no gas chimney evident on seismic data as was seen at Corrib.

The Porcupine Basin - holds plays of Jurassic and Cenozoic age. They may be structural or stratigraphic. Three discoveries have been made in its northern part.

Burren was drilled by Phillips in 1978 and targeted an Upper Cretaceous reef and an Upper Jurassic sandstone.

This was followed by Connemara in 1979 and Spanish Point in 1981 which were designed to penetrate reservoirs of the Steerdagh submarine fan sandstones and fluvial sandstones of the Minagh Formation respectively. Hydrocarbons were found trapped in tilted fault blocks under caps of Lower Cretaceous shales.

None of the discoveries have yet been developed.

Exploration in Ireland became mostly focused on the Porcupine Basin after the 2015 Atlantic Margin Licensing Round in which 28 Licensing Options were awarded to a number of major companies.

However, wells drilled in the Southern part of the basin, namely Dunquin North in 2013, Druid/Dromberg in 2017, and Iolar in 2019, have all been dry. These wells targeted a thick carbonate reservoir, Palaeocene and Lower Cretaceous deep water sandstone fans, and pre-synrift Jurassic and Cretaceous reservoirs in a structural closure, respectively.

Six seismic surveys had been acquired by end-2019 following the 2015 license awards. Additional drilling is due before 2021, in FEL5/13 (Beaufort -  a stratigraphic trap with an Upper Jurassic reservoir), and in FEL 3/04 (Dunquin South - a Cretaceous carbonate reservoir).

Production - Gas production from Ireland reached a peak in 1996 entirely from the Kinsale Head Field and its near neighbours. It will peak once again at a higher level in 2020 as a result of the Corrib Field development.

It is forecast that a further gas peak could be realised as additional discoveries in the Celtic Sea and Northwest Offshore go onstream, along with potential discoveries in the Porcupine Basin. The peak may reach higher overall volumes than 2020 as several fields could be developed at the same time. However, note that a positive Irish response to climate activism may curtail future growth in gas production significantly.

There has been no oil production in Ireland besides minor quantities of NGLs associated with gas. It is forecast that some oil production could be realised by the late 2020s as a result of development of the Barryroe Field in the Celtic Sea, in addition to potential discoveries in the Porcupine Basin.

There has been no onshore production in Ireland and none is forecast. 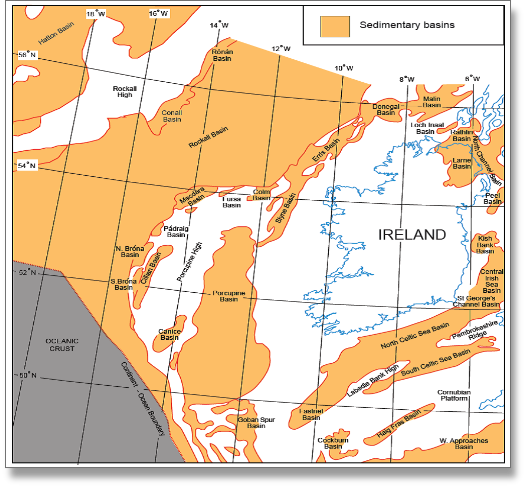