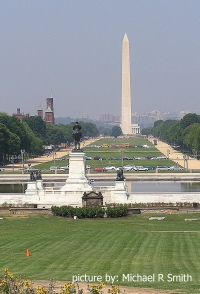 The United States of America (USA) is a federation of 50 states (plus Washington DC), of which 48 are contiguous. The other 2 are in the northwest of North America (Alaska), and in the mid-Pacific (Hawaii). The country borders Canada (north) and Mexico (south).

Siberians settled America over 15,000 years ago. Columbus arrived in 1492 and the Spanish, French and British took control. Georgia, in 1732, was the last of 13 colonies of the UK that would become the USA.

The Declaration of Independence in 1776 led to war with Britain, won in 1783. In 1803 the Louisiana Purchase (from France) doubled the USA’s size. Spain ceded the Gulf Coast in 1819, Texas was annexed in 1845, the Northwest in 1846, and the Southwest and California in 1848. Native tribes were steadily destroyed.

Entry into World War 1 in 1917 confirmed the USA as a global power and after Allied victory in World War 2, it competed for influence with the USSR (in the Cold War). It was left as the world's only superpower in 1991. In 2001 terrorist attacks on the World Trade Centre in New York triggered the ‘War on Terror’ which has influenced its international relations ever since. The USA has the world's biggest economy and substantial natural resources.

The geography of the USA is varied. There are a large number of oil and gas bearing sedimentary basins onshore whilst states bordering the Gulf of Mexico and to a lesser extent the waters off California and Alaska have offshore oil and gas fields.

From the east the coastal plain of the Atlantic seaboard gives way inland to deciduous forests and hills of the Piedmont. The Appalachian Mountains then divide the eastern seaboard from the Great Lakes and grasslands of the Midwest.

The Mississippi and Missouri Rivers run north–south through the heart of the country west of which the flat prairies of the Great Plains stretches out, only interrupted by a highland region in the southeast. Then The Rocky Mountains extend from north to reaching heights over 4,300 m. A super-volcano underlies Yellowstone National Park.

West of the Rockies are the rocky Great Basin and deserts with the Sierra Nevada and Cascade mountain ranges close to the Pacific coast. In Alaska there are active volcanoes and Mount McKinley is the highest peak in the USA. Far out in the Pacific. Hawaii is a series of volcanic islands extruded above a mantle plume or hotspot.

Oil was found in the USA by Europeans in 1627, at the Seneca Oil Spring in New York State, when a French priest was shown oil pooled on the ground near an Indian village. The first commercial well was drilled by Drake in Pennysylvania in 1859 and since then, of the 48 contiguous states, 30 produce now oil and gas, as does Alaska. At least 12 states also deliver production from shale beds.

Oil production first peaked in 1970. New output from Prudhoe Bay in Alaska and from shallow waters, then later, deep waters, in the Gulf of Mexico and from NGLs and from shales, has allowed output to recover but, in terms of energy equivalence, volumes have not matched the rates seen in 1970.

Meanwhile gas production was flat for many years restrained by demand and pipeline capacity. However, gas produced from shales has now revolutionised the market and the USA is forecast by Globalshift to be able to sustain output to meet demand for many years to come, and even export LNG, whilst supply diminishes from conventional gas fields. 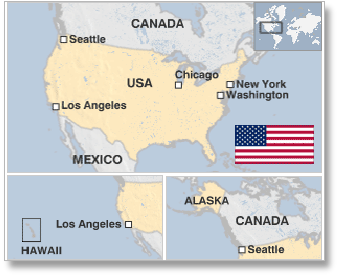 The USA is a constitutional republic and representative democracy.

The President can veto bills and appoints the members of the Cabinet. Citizens are subject to 3 levels of government; federal, state, and local.

The federal bicameral Congress is made up of a 100-member Senate and a 435-member House of Representatives.

The state governments are structured in roughly similar fashion.

Unlike most countries, oil rights extend vertically downward, owned by the surface landowner. Offshore rights are owned by state or federal governments with energy policy determined by these entities.

The Bureau of Ocean Energy Management (BOEM) is responsible for management of offshore resources.